There’s nothing like a splash of prehistoric rock art to remind us that humans have always told stories, just not always in words. And the massive splash across cliffs in the Colombian jungle, revealed internationally this week, tells so many stories that archaeologists, and scientists expect to be uncovering them for years.

Tens of thousands of paintings show patterns, animals, human forms and handprints. How strange and wonderful to see handprints from prehistory. Did our ancestors do dot-to-dot and potato prints too? The animal drawings are even more thrilling; some of the creatures went extinct 12000 years ago, like mastodons (see below), giant sloths and ancient horses. 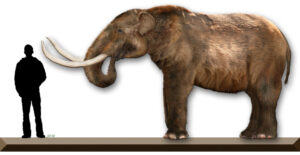 There’s twirling dancer, men with their arms raised as if in worship, people wearing masks and holding hands. Hundreds of films, thousands of characters, tattooed in time on the cliff face and begging so many questions.

Who painted them and why?

How? (Some of the art is so high up the cliff it can only be reached by drones).

How did they know about animals like mastodons and horses, too big to live in the rainforest?

Did any old Joe-mo sapiens paint, or were the most artistic talent-spotted and trained?

How and where did they live?

What have the locals made of the paintings over the years? (They’re only a ‘discovery’ to the international community; people in the area have always known about them.)

So many questions, so many stories. But whatever the painters’ purposes, their work is a priceless gift and affirmation of the value of human creativity, from War and Peace to potato prints.